What Is Ripple: Is Ripple the Next Bitcoin?

With everything that is going on with Digital currencies, fellow bulls and other investors are starting to look at other coins outside of the normal coins like Bitcoin, Bitcoincash, Ethereum, Litecoin etc. Millennial investors want to find that cryptocurrency that will be the next Bitcoin.  The one that will give amazing returns that Bitcoin just isn’t giving right now.

Side Note: Be sure to check out the related article below on Bitcoin and if you should invest.

Related Article: Should I Invest in Bitcoin?

In the last month alone, Ripple went from a price of $0.24 to $2.38. That’s an increase of about 10 times. Had you invested $5K in Ripple, you would be sitting on $50K in less than 30 days later. Alternatively, had you put $5K into buying Bitcoin, you would have had no gain in your investment. That’s right… in the past month, Bitcoin has been stagnant while Ripple has been soaring!

But, hold on! What is Ripple?

What is Ripple (XRP)?

Ripple, established in 2012, is a digital asset for payments geared towards institutions and enterprises mainly used for cross-border payments. It is an open sourced technology built on the principles of blockchain with a growing set of validators. Like Bitcoin, Ripple has very low fees.

If you go to their website, you will find that they claim themselves to be “the fastest and most scalable digital asset. They enabling real-time global payments anywhere in the world”. Transactions are not subject to any waiting periods. Below are the transaction waiting periods of various currencies (Ripple, Ethereum, Litecoin, BTC, and Traditional Systems such as USD) as compared to XRP: 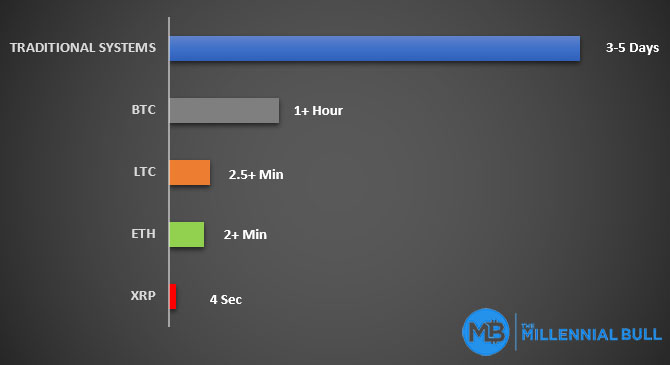 As you can see from the above illustration I created (which is not scaled to size), Ripple transactions only take 4 seconds. This is practically instant as compared to Ethereum at more than 2 minutes, Litecoin at more than 2.5 minutes, Bitcoin at more than 1 hour and the traditional systems at 3-5 business days.

Lastly, there have been roughly 36 million ledgers as of the date of this publication. All ledgers have closed without issues since inception. Currently (as of 1/8/18) Ripple is priced at $2.38 with a 30-day volume of roughly 62.79 Billion USD and a market cap of $237.98 Billion USD.

According to Wikipedia, Ripple is used by companies such as UnitCredit, UBS, Royal Bank of Canada, and Santander to name a few. It has been increasingly adopted by banks and payment networks as settlement infrastructure technology, with American Banker explaining that “from bank’s perspective, distributed ledgers like the Ripple system have a number of advantage over cryptocurrencies like bitcoin, including price and volatility”.

It is also worth mentioning that the Ripple network can continue to operate without the Ripple company. Any type of currency can be exchanged with Ripple including USD, Euros, RMB (Chinese currency), Yen, Gold, rupees and even airline miles.

What Is the Global Payment Steering Group (GPSG)?

These members oversee the creation and maintenance of Ripple payment transaction rules, formalize standards for activity using Ripple and other actions to support the implementation of Ripple payment capabilities.

Where Can I buy XRP?

As of 1/8/17, Ripple (XRP) can be purchased at the following exchanges (with additional exchanges popping up consistently):

Note: The above list came from Ripple’s very own site. The Millennial Bull does not endorse, recommend, or make any representations with respect to the gateways and exchanges that appear above.

Unlike Bitcoin, Ripple isn’t created or mined. The company is in charge of how many coins are in circulation. Initially, 100 billion coins were created but roughly 38 billion are circulating. The rest are sitting in escrow. According to Ripple (the company), they do this in order to “create certainty of XRP supply at any given time”.

However, Ripple management can release up to 1 billion coins every month. In fact, 1 billion coins are available and if they do not get used, they get put back in escrow to be released 55 months later. Some think that this could eventually oversaturate the market. Ripple on the other hand says that it is not in their best interest to oversaturate the market as many have feared.

In the past 18 months, Ripple has released about 300 Million XRP per month. The escrow feature allows users to be able to hold funds until a service is completed without having to trust intermediaries. This is a feature currently unavailable with any of the other cryptocurrencies.

Should You Invest In Ripple?

However, buying Ripple would mean that you are speculating on the coin. You are speculating that the price will go up. Maybe you believe that the coin will be in demand due to the fact that it has actual usages (like Bitcoin) with actual technology behind it.

You need to read more on how the banks and institutions are using the coin and what the future of the coin seems to be. Make sure that you also follow what is going on when it comes to Ripple and the crypto market on a daily basis. This will help you know when you need to sell or when you need to buy more.

With that, I say to you… Good Luck! And make sure you [spu popup=”1405″]subscribe [/spu]to our newsletter for up to date news on the Crypto market and other investments.

The shortcut to financial freedom is hard work, determination and perseverance!

Why You Should Leave Your Job: How To Increase Your Salary

8+ Personal Finance Tips To Get Rich In...

The Basics of Bitcoin

We are a husband and wife team that have turned our mutual dream of running our own businesses into a reality. We quit our jobs to make money on our own time and we are here to teach millennials how to do the same!

Sign up to receive our free meal planner and grocery list printables to keep you organized and save time!